What if I have more questions?

If you have further questions regarding the GTX please call or Email us at Acme Car Co. Our offices are open at 8:30 am. through 5:30 pm. Monday thru Friday. Email inquiries to info@acmecarco.com.

Can the GTX be titled?

The GTX frame is supplied with an MCO, and that along with the title of a donor car should be sufficient in most states. When purchased together, the body and frame will have matching serial number plates. In all paperwork from Berrien Buggy by Acme, the GTX will be referred to as a Roadster, to avoid issues that have arisen in several states concerning the vehicle type.

Each state Department of Transportation has its own rules and regulations regarding titling. We suggest you check your State’s web site or talk to an experienced builder regarding your particular States requirements

What is different about the steering?

Because we have moved the entire power train and suspension from a front-wheel-drive car and installed it into a rear-wheel-drive car, the rear wheels are actually able to turn.  By removing the steering assembly from the Cobalt/HHR, and fastening the tie rods to mounts which are part of the GTX chassis, we have stabilized the rear wheels.  The GTX now also has the ability to adjust rear-wheel toe in or out easily.  The actual steering is accomplished by using the front components from a VW Beetle years 1969 through 1976.  The entire front suspension assembly (the beam), steering box, tie rods, & steering arms are all used.  A VW or aftermarket steering column is also used.

What are the motor options?

The engine for the GTX is known as the EcoTec and has been in the GM family for quite some time.  The engines we are recommending were produced as 2.2 and 2.4-liter engines.  Many have variable valve timing.  All are electronic fuel injection, with coil packs on the spark plugs.  Three induction systems were used in 2006 through the 2010 period.  They were normal aspirated, turbocharged and a limited number with belt-driven superchargers.  Flywheel horsepower ranges between 165 and over 300.

We do not recommend the supercharged version.  It was only produced with a standard transmission.  We did not intend for the GTX to have a manual transmission so it is uncertain if that combination would fit.  We also would not be able to provide a correct wire harness.  For those who may want to try such an installation, we suggest you call and talk to Jason at our technical partner S&S Automotive.

Can you go in to some detail on the fuel system?

The GTX uses a modified VW type-1 gas tank that is modified for buggy use.  On the top of the tank, the original fuel fill is blocked off and an external fill bung is welded to the tank, it then uses a marine-grade stainless steel fuel fill assembly.  On the bottom, the original fuel connection is removed and 2 steel bungs (1/4” NPT ) are welded into the tank, along with a 1 quart baffled sump.  A -6 fitting is inserted into the lower bung, which is then plumbed to a high-pressure electric fuel pump.  This pump must be capable of producing constant pressure of 40 lbs.  A -6 line is routed through the tunnel to the engine where a pressure regulator is mounted, along with a pressure gauge, then plumbed into the fuel rail.  In order for the fuel regulator to work properly, a -6 line is run through the tunnel back to the tank, into a -6 SAN fitting in the second bung in the tank.  A vent is needed to vent the fuel tank.

How does the wiring work?

There are basically two separate wiring systems in this car. The engine wiring system is a separate fused system, which controls all the engine functions, including the electric fuel pump. It is powered through a wired connection to the ignition switch. All the other functions, lights, wipers, stop lights, radio, etc. are powered through a second fuse block in exactly the same fashion as a standard buggy.

What are some of the details on the wheels?

As manufactured the Cobalt & HHR’s had 2 wheel patterns. They were 4 lug X 100mm and 5 lug X 110mm. Either pattern is usable on the GTX. Both patterns are popular on many non-GM cars, making it possible to select a very wide variety of wheel styles, and sizes. As stated earlier, Berrien Buggy can provide front brake rotors drilled and tapped for either wheel pattern.

Can you give me more information on the brakes?

The GTX uses a VW type ball joint front suspension. We recommend that an aftermarket disc brake conversion be installed or that a beam from a Karman Ghia be used as it is equipped with disc brakes. Front brake rotors drilled and tapped for either of the Cobalt/HHR wheel patterns are available from Berrien Buggy. A disc brake conversion kit in either wheel pattern is available for the VW ball joint front end.
At the rear, the entire Cobalt/HHR brake system is used. Tabs are welded onto the frame in order to use the original rubber brake lines from the wheel to the frame. The builder will have to fabricate steel brake lines from the VW dual circuit, a big bore master cylinder to the wheel lines.
The brake pedal is the original VW. A VW brake, a clutch is used, but the clutch pedal and shaft are removed, and only the brake pedal is used, including a VW master cylinder pushrod. A pedal stop is included with the GTX frame.

An emergency brake system is under development and should be available by late fall.

What about the cooling system?

The original Cobalt radiator and electric fan are used. The GTX frame has mounting tabs welded to the frame to make the radiator installation fairly simple. 4, O.E.M. mounting grommets are used to secure the radiator to the frame mounts. The original surge tank is used. Currently, the builder will have to fabricate their own water lines from the engine to the radiator. We are developing a cooling system kit which will be available shortly.

How are the engine and transmission mounted?

The GTX frame is designed to use General Motors, O.E.M. motor mounts designed for 2006 through 2010 Chevrolet Cobalt and HHR cars. With the exception of a spacer needed for the anti-vibration mount at the transmission, all mounts are available from GM dealers, aftermarket suppliers, or online. The spacer is produced by Berrien Buggy and is included with the frame. Please note that as we produced the production version of the frame, we sourced all necessary parts from our local Advanced Auto Parts or GM dealer. Engine & transmissions in other models of GM cars may also be used by installing the 2006 through 2010 Cobalt and HHR mounts.

What about the computers?

Berrien Buggy/Acme Car Co has formed a technical alliance with our newest GTX dealer, S&S Automotive, who will be doing the reconfiguring on the engine harness, as well as the computers (ECU & TCU).

After you have purchased your donor car and disassembled it, you should ship your engine harness and computers to S&S, including the year and the serial number of your donor car. S&S will work their magic then ship your harness back to you. We are doing this so that the harness will plug into your engine sensors without any problems. GM changed plug configurations throughout the production years, and this method we believe will avoid a mix & match confusion.

Will the body I already have fit the GTX?

If your body was designed to mount on a VW pan that was shortened 14 ½”, and matches the basic physical dimensions of our Nostalgia or Lancer then with some internal fiberglass removal, your body should be able to be mounted on the GTX frame.  The critical dimension is the height of the body at the rear of the passenger compartment.  This is the area where the struts are mounted, and cannot be changed.  Your body needs to be tall enough to clear the rails in that area.  To confirm that dimension, sit your bare body on a level floor.  Lay a long straight piece across the top of your body at the rear of the rear jump seat.  Measure vertically, from the floor to the BOTTOM of the straight piece.  The minimum height can be no less than 23 ¼”. 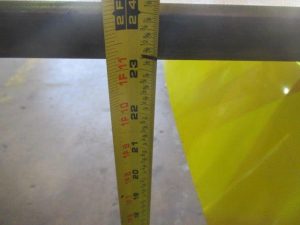 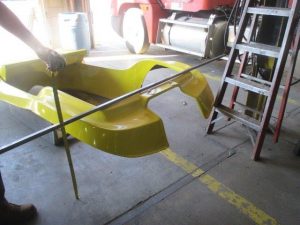 Why a Chevy and not a Subaru or later VW?

The motive for developing the GTX was to provide an automatic transmission in a dune buggy. While the Subaru and VW engines are great engines, when put in a buggy they were still connected to a stick shift transmission, and we saw no way to economically change that. After a great deal of research, we came to the conclusion that the drive train in many of the GM offerings would work in a buggy. They were plentiful as they were offered in a variety of models, they were reasonably priced, especially in a salvage condition, and technical assistance was readily available. Lastly, it fits within the bodies we were already producing.

What does the GTX cost, compared to a traditional buggy?

We believe that at the end of the build the final price will be about the same. While the frame and body costs are higher, A good bit of money can be saved with the cost of a donor car. A good usable VW Beetle donor will cost in the thousands, whereas a Cobalt wreck can be purchased for hundreds. If you do not have a donor VW then the cost of good parts purchased individually is even higher.

Our GTX dealer in Iowa is building a GTX for his personal use. He purchased a wrecked (hit in the rear) 2010 Cobalt for $750.00, it had factory aluminum wheels, and good tires. He spent $125.00 in gas and tolls to pick up the car. After removing everything he needed, including wheels and tires, he sold the remains to a local salvage yard for $250.00. That put his net cost at $625.00, for the engine, transmission, rear suspension & brakes, throttle & shift assemblies, radiator & fans, wheels and tires, wiring harness and computers. So at this point, he is even with or less than a VW build.